The Lichtenberg HPC can only be used via projects, defining the approved amount of resources the project can allocate on the HPC. In other words, a project's allotted number of core*hours determines the “share” of the overall computing resources of the HPC for this project.

All core*hours used within the course of a project are accounted on that project (like money spent is accounted on a bank account).

A user account (personalized) is associated with one or more projects (the first project being that user's default project).
Unlike user accounts, projects can be shared among several colleagues and students working on the same scientific problem.

Submitting batch jobs is not possible without (implicitely) specifying a project (sbatch -A parameter). If a user does not explicitely specify sbatch -A <projectname>, the job will be allocated on that user's default project.

With the commands csum and csreport, any user can get a list of their current overall resource consumption.

At the end of a month, users get an automatic email with a usage overview on all projects they are associated with (“Lichtenberg User Report”). 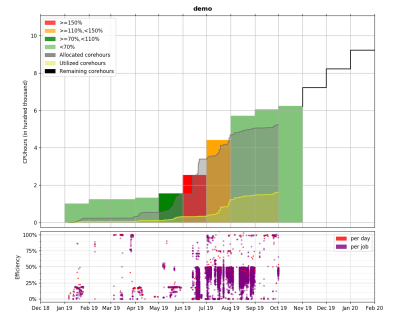 Since October 2019, the monthly mail with the resource usage features a graphical overview on the activities for a given project. The diagram provides the users with an easier insight into resource usage and efficiency of their projects.

The graph's upper panel shows the used core*hours over the validity term of the project, up to the current date. The gray line details all the accumulated core*hours allocated for the project. These correspond to the

The yellow line depicts the accumulated core*hours that the allocated cores were actually busy performing computations, and thus actually utilized for your computation.

If a 10-hour job running on 16 CPU cores executes with a 50% CPU efficiency, the project will be accounted a total of 160 core*hours (gray line), even though only 80 core*hours were actually utilized (yellow line). Even if 12 hours of runtime were requested for this example in the job script, only the job's actual runtime of 10 hours will be accounted on that project.

The colored bars indicate the project's monthly quotas (starting at the accumulated core*hour mark at the beginning of a given month), and are color coded according to the actual relative usage.

If applicable, the remaining quota until end of the project is extrapolated and plotted using a thick black line.

The graph's lower panel shows the CPU efficiency of each distinct job of the project. For that, the fraction of utilized core*hours divided by the accounted core*hours is used (not the core*hours requested in the job script).
Each job is represented by a semi-transparent purple dot. Multiple jobs with the same efficiency will overlay and appear as darker dots.

The smaller red dots indicate the average CPU efficiency of all jobs of each day with active jobs. Since the purple dots do not differentiate with respect to job length and size, the red dots will help to assess the efficiency of computations for days with varying efficiencies and job sizes.

Currently, this visualization only includes CPU metrics; it does not include any usage of accelerator cards (eg., GPUs) in conjunction with the CPU metrics.

In case you need the graph for your project(s) in a resolution-independent vector format, please don't hesitate to contact us as described at the end of the page.

In the case that it is of interest to determine the efficiency of specific jobs or to identify specific jobs with a given efficiency, the HKHLR offers helper scripts. The necessary JobAnalysisTools module may be loaded by entering

in a job script.

It offers three utilities. Using the

script, a list of efficiencies for recent jobs (default 7 days) can be generated.

If you want to scrutinize a certain job, you can use

to see that job's efficiency.

returns the JOBIDs in the given efficiency window between [$lowerBound,$upperBound].

If you require further assistance, clarification or have feedback, please do not hesitate to contact us, either via the TU Darmstadt ticket system, or via mail to darmstadt@hpc-hessen.de.