Hardware and Configurations of the Cluster 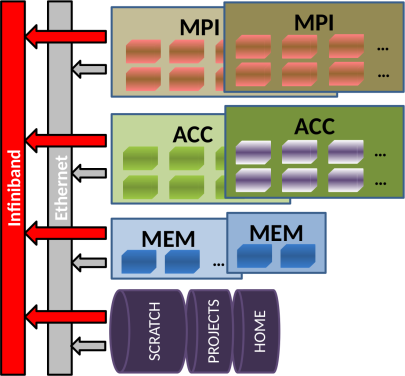 The cluster consists of several sections:

The whole system is located at the HPC building (L5|08) on campus Lichtwiese, and consists of several stages (“phases”), running concurrently.

With the last expansion of 33% in capacity and bandwith, the current system provides 4 PByte disk storage, using SSD (Solid State Disks) for the meta data and ~1300 legacy magnetic disks for raw data.

One of the most notable features of the storage system is its constant distribution of all files and directories over all available disks and SSDs. Unlike before, there is thus almost no performance difference any longer between eg. /work/scratch and /home. In addition, any expansion in storage capacity also eventuates a substantial gain in storage performance.

We currently see an aggregate bandwidth of up to ~120 GByte/s in reading and ~106 GByte/s in writing.

In the Lichtenberg 2, there are no “islands” any longer (as they were in LB1).

All MPI compute nodes all over the cluster can reach and talk to each other with almost the same speed and latency (the InfiniBand fabric is “non-blocking”).